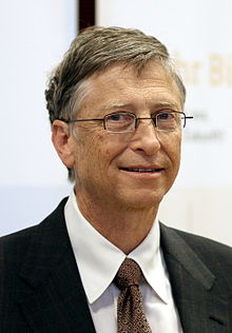 If many of you didn't know, this picture to the left is Bill Gates. He co-founded Microsoft with Paul Allen in 1975. As many expected, the dream of his was creating a software that would benefit millions across the globe. In an interview at the University of Washington, his initial reaction was "I didn't start out with the dream of being super-rich. And even after we started Microsoft, and the guys who ran Intel—Gordon Moore and those guys—were billionaires, I was like, 'Wow, that must be strange.' And so—it is, it's quite strange" when responding to a Chinese student aspired about wealth. His dream may have been to create an advanced, new software, but like Langston Hughes says in his poem, it may have "dried up like a raisin in the sun" when he launched the software. Of course he was happy about the new Microsoft Windows system, but what he received was billions of money. His new dream was to start a foundation, which is now called the Bill and Melinda Gates Foundation. The primary aspects of the foundation are aimed at to enhance healthcare and help reduce the extreme poverty, globally. In America, it's aim is to supply better educational opportunities and access to information. Because of the wealth he had not dreamt for, he uses it in many ways as he can to help create better lives across the globe. Of course the poverty rate may never change, what Bill and his wife still continue to have is hope.
“To give anything less than your best is to sacrifice the gift.” Steve Prefontaine

“The thrill is to keep envisioning what can be.” Oprah Winfrey

"Follow your passion, be prepared to work hard and sacrifice, and, above all, don't let anyone limit your dreams." Donovan Bailey

"The best way to make your dreams come true is to wake up." Paul Valery

"I always feel like it's two key ingredients when it comes to following your dreams, making something happen that the average person deems difficult. If you truly believe it, that's step one. Step two, is, you know, the hard work that goes along with it." J Cole