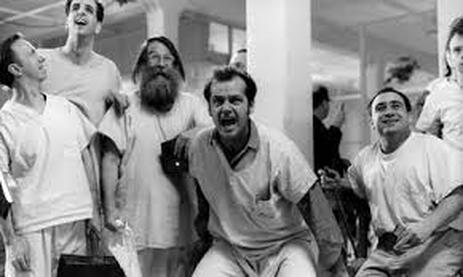 Perhaps one of the best supporting cast of all time lies in Ken Kesey's One Flew Over the Cuckoo's Nest. As mentioned before, Randall Patrick McMurphy is "no ordinary admission." Nurse Ratched was always the opposing force in the tension between herself and McMurphy. She wanted order and tradition, while McMurphy aspired for change. One of the major, yet smaller scenes of the novel is the monopoly scene. The Monopoly scene consists of McMurphy over looking the acutes play together, but something has definitely changed. The acutes are finally talking, and what makes it better is that they are talking how McMurphy talks, like his sarcasm, his terms, and willingness. Life has finally been put into them and it was because of the Acutes being able to trust each other.

Every Acute is a tragic character because they all struggle to find their personal dignity before McMurphy comes and even when he arrives at the ward. Nurse Ratched has issued a log book for them to write down bad things that the other Acutes do. This helps them turn on each other, causing no one to trust each other. This has served as way of Nurse Ratched containing order and control over the men of the ward.

The fog has been a major symbol of blindness and isolation from the real world. There really is no fog, but according to Chief Bromden, the fog is present and prevents the patients from getting life into them. At medication time, the patients are given pills that are unknown to them and it creates a "fog". The fog separates man from the real world in the novel. The fog had forbid them to "see". McMurphy's boisterous actions and personality had caused the fog to flee. This meant that the men on the ward were able to see again, allowing McMurphy to gain a possible position of a "savior".

As mentioned, McMurphy acts as Superman to the men on the ward because he's the most confident of them all. When Nurse Ratched refuses to turn on the television set for the men (mainly McMurphy), the other men had contributed with McMurphy. What McMurphy did was pretend that there was a World Series game on, and to make the men happy, he acted as if he was a commentator of the game. Previously to when many of them refused to watch, due to disobeying Nurse Ratched's rules, they seemed obligated towards McMurphy. Now, they are completely agreeing with him as they completely ignore her. Our of this, McMurphy gains the trust from the men. But also, as shown in the picture from the movie above, what is so special about this scene is how their personalities came together to show the celebration of only a baseball game. Not only did the men trust McMurphy, but McMurphy had trusted the men too.