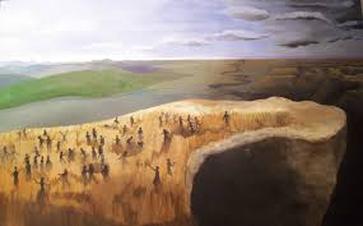 ". . . I’m standing on the edge of some crazy cliff. What I have to do, I have to catch everybody if

have to come out from somewhere and catch them. That’s all I’d do all day. I’d just be the catcher

in the rye and all."

The famous quote shown above helps inspire the key message of Catcher in the Rye: Holden hopes to "catch" children before they fall into adulthood. According to Holden, the adult world is full of phonies. But he seems like an adult because one, he's sixteen years old, and two, he seems to understand the morals of the adult society. Because he feels so much pain within himself, he feels he should catch the children before falling so they don't end up like him or phonies. Although this dream is delusional, he still has hope. When he has hope, he attempts the unobtainable dream. The ideal life that he imagines is a world full of young innocent people; there are no phonies and nothing changes. At the end of the novel he realizes that he doesn't want Phoebe to end up like him because he knows he's lost, but what he desires for is impossible. Everyone changes at some point in their life, for the better or for the worst, and Holden somehow does not realize that.

When he sits on the carousel in the park with Phoebe, he enjoys it because it spins around and around in a circular motion. Nothing changes. It's all the same. He thinks that people can be saved from adulthood. Another ideal he hopes for is fleeing society like Huck Finn. Holden is attempting to find his place in society because he feels estranged from it. What keeps him from finding his rightful place in society is himself holding onto innocence. So instead of finding his place in society, he hopes that running away with Sally will resist change. When he's in New York, he loves visiting the Natural History Museum just because of the glass cases because they're always the same. They never change over time, and it's like they hold on to innocence, which Holden adores. The problem about Holden is that he's his own worst enemy and doesn't want anyone, especially Phoebe, to end up like him. If his thesis is to catch children before they fall and the adult world is full of phonies, then without himself even knowing, he is saying that he is a phony.

Holden Caulfield is obviously isolated from society: he's been expelled from high school and his only potential friends are Sally Hayes and his younger sister Phoebe. Even though his rightful place in society is unknown, what he tries to overcome is the scheme that degrades him from being a man. Occasionally in the novel, Catcher in the Rye, Holden went through meltdowns. The anatomy of a meltdown is: 1.) Want/Need something but you don't know what it is; you don't even know what you don't know, 2.) Wanting the impossible, 3.) Going through emotional highs and lower lows, and 4.) Desperation. In Green Day's song Boulevard of Broken Dreams, lead singer Billie Armstrong sings "my shadow's the only one that walks beside me, my shallow heart's the only thing that's beating." These two lines relate to Holden chasing ideals because Holden is the only one that holds this type of thesis mentioned above. So therefore, he walks alone. But another song of Holden's playlist, Unwell by Matchbox Twenty, lead singer Rob Thomas sings "﻿But stay awhile and maybe then you will see a different side of me﻿." This line also relates to him chasing ideals because if he has this song on his playlist, it's like he's encouraging himself that his thesis will come true.